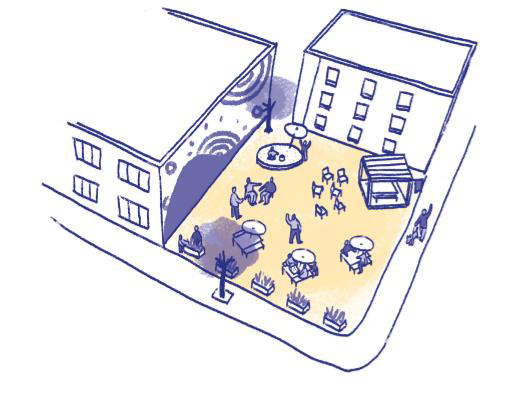 To help neighbourhoods bring their community-improvement projects to life, the Vivace-CIP program is offering guidance and support for urban and public-space development projects that will encourage people to come together, enhance neighbourhood life, and fight social isolation. Supported by the McConnell Foundation’s Social Innovation Fund as part of the Collective Impact Project, the Vivace-PIC program will also bridge the expertise of the neighbourhood roundtables in community development with the ability of La Pépinière Espaces Collectifs to reappropriate public spaces.

These projects are being implemented according to public health rules, and some may be carried out in the fall or next summer

Here are the seven neighbourhoods receiving help for the first year:

LACHINE: Place du Village Project
Turning the public space around the former Saint-Pierre market into a pop-up village will enhance the link created between the new food cooperative set up in 2018 and neighbourhood citizens. The Place du Village project could become a new place where people in Lachine can take a stroll and get together.

ROSEMONT: Espace Terrasse 40e/Beaubien
The goal of the Espace Terrasse 40e/Beaubien project is to build an outdoor space to improve the community and civic hub in Rosemont’s east end. Launched six months ago, this project is a grassroots citizen mobilization initiative to create lasting connections between community agencies and the people that neighbourhood stakeholders have a hard time reaching. The project will also address the lack of community infrastructure in the area.

SAINT-LÉONARD: Citizen Space Project
Support in Saint-Léonard will go toward creating a business model to develop a Citizen Space in the neighbourhood, plan the steps to develop the site, and determine how to engage citizens, which is essential to bring the project to life.

SAINT-MICHEL: 1PAKT Project
The 1PAKT project creates inclusivity in public spaces related to people’s social, cultural and working lives and is continuing its social reappropriation work in George-Vernot Park and Ovila-Légaré Park. By making these spaces an active part of the community, the project will engage more residents in issues that affect them, such as the future development of the Francon Quarry and how people get around the neighbourhood.

VERDUN: Toward a neighbourhood food space
This project involves setting up a grocery-store-style food space that is accessible to the neighbourhood’s most vulnerable populations. This space will also be home to a welcoming corner café where people can gather, as this type of establishment has become harder to find in the wake of gentrification.